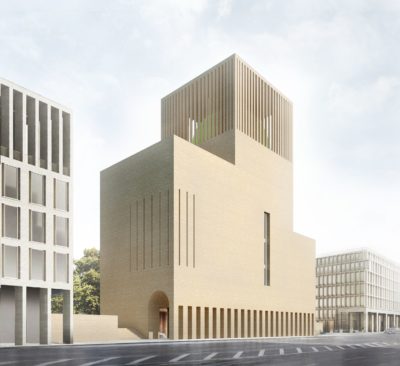 The house of one is a unique project right in the middle of Berlins historical city center in which three religions are going to come together in one house. Involuntarily you see a lot of difficulties, but also a lot of chances rising. At the same time you could wonder, why nobody ever tried that before.

Three religions – One house – One plan

Three religions – one house, is the device unter which three representatives of three religions came together in autumn 2011 following the initiative of the Protestant congregation St.Petri- St. Marien. The „Verein Bet- und Lehrhaus Petriplatz Berlin e.V.“ is the agency of the project and was founded equally by the jewish „Abraham Geiger Kolleg“ the islamic „Forum für interkulturellen Dialog e.V.“ and the christian „Kirchengemeinde St. Petri – St. Marien“.

They represent their religion without excluding different beliefs – they invite others to join them. There ist a sunnitic community involved so far, but they don’t want to exclude people of shiitic believes. Als well it is planned to get people from the catholic church involved later on. Under all circumstances they want to support the dialogue between different beliefs.

The architecture supports the dialogue

Also the architecture is supporting this. A big commom central room of encounter ist he only entrance tot he building. From there you can go to the three different rooms: the mosque, the synagogue and the church. The winner of the global architecural competition was the Berlin based architecure office KuehnMalvezzi among 200 competetors. The building is going to be based right in the middle of the historical city center of the double city Berlin-Cölln. This ist also where one of the oldest churches oft he city of, the St. Petri church, once stood. The building was heavily damaged after World War II not restored and destroyed in 1964. At this historical meaningful place the House of One is going to write a new chapter of integration.

Who wants to support the project, can buy one (or more) symbolic stones fort he church. As soon as enough money will be funded, the building can be start being constructed. It is planned for 2017 at the moment. It is a really unique and ambitious project. Especially in times of religious motivated wars, the refugee crisis and in a time when suspiciousness against other religions is coming to new heights, it is a project whichs symbolic power cannot be overrated.